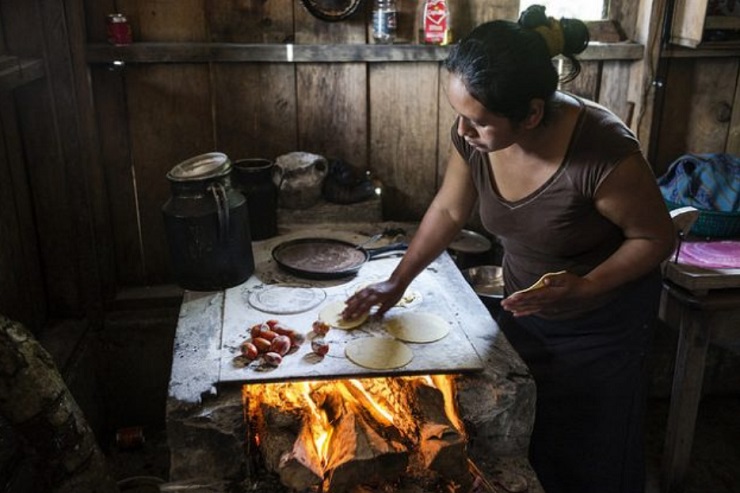 A WOMAN MAKING TORTILLAS IN HER HOME IN THE VILLAGE OF SAN LORENZO, CHIAPAS, MEXICO. IN LATIN AMERICA, 8.4 PER CENT OF WOMEN ARE IN A SITUATION OF SEVERE FOOD INSECURITY, COMPARED TO 6.9 PER CENT OF MEN. (CREDIT: FAO)

The number of undernourished people increased for the third consecutive year in Latin America and the Caribbean. It has exceeded 39 million people. In addition, almost one in four adults is obese, while overweight affects 250 million; more than the entire population of Brazil.

For this reason, for the first time, four agencies of the United Nations system -FAO, PAHO/WHO, UNICEF and WFP- have joined together to publish the Panorama of food and nutrition security in Latin America and the Caribbean 2018.

This year’s edition focuses on inequality, a fundamental issue for the region. Inequality contributes both to hunger and several different forms of malnutrition. In Latin America, 8.4 per cent of women are in a situation of severe food insecurity, compared to 6.9 per cent of men. In ten countries, 20 per cent of the poorest children suffer three times more chronic malnutrition than the richest 20 per cent. Indigenous populations suffer greater food insecurity than non-indigenous people, and rural populations have higher rates of poverty than urban ones.

Without addressing inequality in food security and nutrition, we will not be able to fulfill the commitment we have adopted to leave no one behind, established in the 2030 Sustainable Development Agenda.

It is necessary to understand why malnutrition, lack of micronutrients, overweight and obesity have a greater impact on people with lower income, women, indigenous people, people of African descent and rural families. Above all, we must act in a differentiated way to ensure that these social groups and the populations of territories that are lagging behind can also fulfill their right to food.

FAO, PAHO/WHO, UNICEF and WFP are convinced that it is perfectly possible to transform our food systems to ensure a better diet for all, in a way that is more sustainable an adapted to climate change.

Today we understand that we need actions in production, international trade, processing and marketing of products to have healthy food. We can work to improve environments, in a way that facilitates access to healthy foods, and encourage practices that help people make more informed and responsible consumption decisions.

Some governments are already implementing a new generation of policies to address the specificities of the groups that are suffering the most. Innovative public policies to reduce overweight and obesity are also being applied for the first time.

For these policies to be successful, we need the participation of everyone. Together we must think of ways for all the actors of the food system to act more responsibly with society and the environment, from producers to consumers. Together we can build food systems that ensure adequate food in the present and in the future. Together we can guarantee a healthy life for all and become the zero hunger generation.