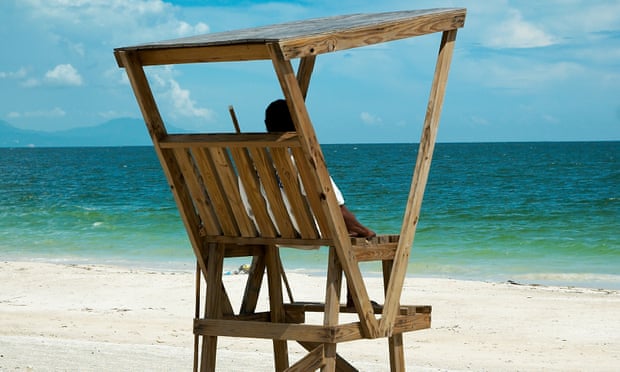 Hellshire beach, Jamaica, in 2008. The beach has largely disappeared since due to erosion. Photograph: Zickie Allgrove/Getty Images

Climate change is eroding beaches all over the Caribbean – even though the region contributes a tiny fraction of the emissions heating the planet.

Sunbathing mothers keep an anxious eye out for children enjoying horseback rides, as groups of young men engage in energetic games of beach football and cricket. Further along, a boombox blasts as the smell of fresh fish wafts across the shoreline.

For years, this was the scene at the Hellshire Beach in Portmore, St Catherine, on a public holiday or weekend when Jamaicans and visitors alike would flock to one of the island’s most popular beaches. Today, however, parents no longer bring their children. The horses, along with most of the beachline, have long disappeared and the few visitors who come to Aunt Merl’s or Prendy’s on the Beach – two of the few remaining seafood restaurants left standing – are confined to the benches inside. The beachfront has been swallowed by the surging tides, a result of decades of climate change and mismanagement.

“The recreational areas are totally gone so the sea is now right at the steps of the business places,” says Gladstone White, director of the Half Moon Bay Fishermen’s Co-operative, which has been lobbying for funding for infrastructure work to stabilize sections of the beach.

While island nations like Jamaica contribute a tiny fraction of the greenhouse gas emissions that are heating the planet, they are poised to suffer the worst consequences of the climate crisis. Coasts play a critical role in the economies of many Caribbean nations, whose population centers are close to the shore and who rely heavily on their ports and on tourists attracted to their picturesque waters. But beaches throughout the Caribbean are eroding as a result of rising sea levels and dangerous storms resulting from climate change. And many island nations lack the funding to invest in the infrastructure and innovation necessary to combat the changes – a situation made worse by the Covid crisis.

While Jamaica has a mixed record on environmental protection, the country is part of a coalition of small island nations that has been instrumental in lobbying for global climate action, and recently became the first Caribbean nation to increase the ambitiousness of its plan under the Paris climate agreement to reduce its carbon emissions.

But the US is set to withdraw from the agreement on 4 November, imperiling the treaty’s goal of limiting global heating to “well below” 2C, along with prospects for global action sufficient to ward off increased risk to the people and lands of the Caribbean.

Hellshire Beach, where the marine ecosystem is rapidly eroding, offers insight into what’s at stake for many Caribbean communities. Intensified storm activity and increased water temperatures are helping destroy offshore coral reefs that otherwise buffer the shoreline from pounding waves. The problems are compounded by unregulated commercial development and waste treatment, along with the removal of sand dunes and other vegetation. A landmark report published in 2012 found that Hellshire had lost up to 120 meters of shoreline in four decades. When the scope of Hellshire’s destruction became clear, the government seemed ready to act quickly and decisively. A master plan to rehabilitate the beach was created – but then dashed in 2016 when the People’s National party (PNP) was swept from power. Since then, budding initiatives meant to invest in the beach have been consistently shut down, often without explanation.

Jamaica’s economic difficulties will thwart any short-term action to save the beach. The coronavirus has served a major blow to tourism and remittances, the country’s top two sources of revenue. The post-crisis receipts from both are forecast to fall to just around half the US$5.4bn of value they represented before the pandemic, with remittances ­expected to decline by 17% and tourism by 68%.

Jamaica’s National Environment and Planning Agency says that while rehabilitation efforts have been derailed by the economic impact of Covid-19, they will be picked up next year. But despite Nepa’s reassurances, a tourism official told the Guardian that the Hellshire master plan has been shelved indefinitely.

White, director of the fishermen’s co-operative, says the decision to scrap the master plan will hit members “big time”.

“Thing are so bad that fishermen are finding it difficult to find places to dock their boats,” he said.

Prendy’s on the Beach was once arguably the biggest and most popular seafood restaurant on Hellshire. Now that the beach has disappeared, so too have many of its customers – a situation exacerbated by government-imposed Covid-19 restrictions on public gatherings.

A seafood restaurant at Hellshire Beach. The sea is now perilously close to the businesses on the shore. Photograph: Christopher Serju

“I have to be creative,” says Donnete “Prendy” Prendergast, who has been operating her restaurant at Hellshire for more than 20 years. “So I do family packages for people who still come out even if they can’t get to swim. But honestly, not being able to swim takes away from the Hellshire experience, because they come here not just to eat but to have some recreation.”

Jamaica has long sent mixed signals on its commitment to environmental protection. Environmentalists recently protested against the government’s decision to allow bauxite mining in an area that supplies drinking water to the parishes of Trelawny, St Elizabeth and St Ann. The government also met with outcry over its decision to sell off fertile land to developers to build a new city, despite the fact that just a fraction of Jamaica’s land is available for farming. 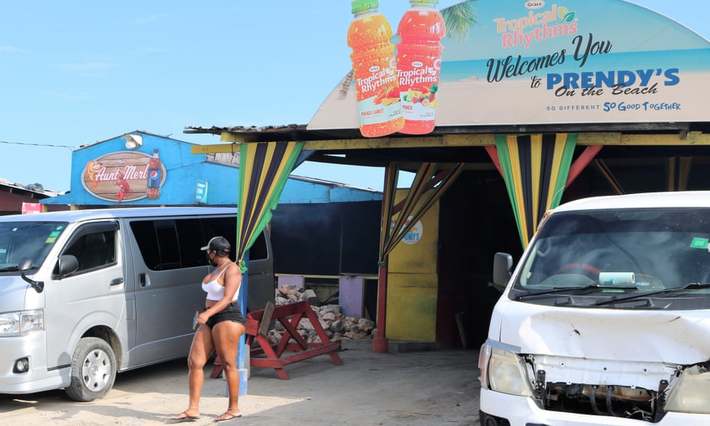 And environmentalists, archaeologists and residents have been united in their opposition to the construction of a floating pier for cruise ships in Port Royal, arguing that the fragile ecosystem is in danger. Despite this, the pier opened last year to much fanfare but generated little economic spinoff for locals.

For her part, Prendergast would be content with the government showing its commitment to addressing climate change by taking one small step towards resolving beach erosion at Hellshire.

“I think the authorities need to really give Hellshire some love because it is really a beautiful place and what we offer is really unique because you can’t go get our festivals anywhere else,” she says, referring to the cornmeal-based Jamaican fried dough sold on the beach.

But time is running out for the Hellshire Fishing Village beach and its natural and manmade allures. Soon, the forces of nature, along with local and global inaction, will make it, and many more pristine beaches in the region, no more than a distant memory – a faded photograph in an old scrapbook.

Prendy’s on the Beach was once arguably the biggest and most popular seafood restaurant on Hellshire, but many of its customers have disappeared. Photograph: Christopher Serju Lifestyle blogger Jhunelle Jureidini with her quarantine kit,created from items found in her pantry. (Photos: Contributed)

And when loved ones are out of reach, it’s oftentimes difficult to show them how much you appreciate them. Small gestures go a long way and lifestyle bloggers Jhunelle Jureidini and Tiana Chung show just how they maintain their friendship given their separation due to the global COVID-19 pandemic.

The government imposed six-to-six curfew has made socialising with anyone outside of your household almost impossible. With the coronavirus continuing to upend familiar rhythms of life, leaving bars, churches, and schools closed, hundreds working from home and others jobless, those looking for ways to pass the time have leaned towards creativity.

In the absence of busy schedules, users accept social media challenges in droves. Some bring together families for choreographed TikTok dance routines while others channel their inner fashionista with the #PillowChallenge.

All in a day’s work and in efforts to ward off boredom. But, one such challenge that seems to connect even more people is the Quarantine Kit challenge. Jhunelle Jureidini, curator of Simplylocal.life, suggested she and fellow blogger Tiana Chung, food blog curator of WongaGyal, create and exchange quarantine kits.

“WongaGyal and I had been talking about collaborating for a while but had no concrete ideas.”

“She started selling customized quarantine kits and that's when I thought that would be a unique and thoughtful way for us to share with each other, but a little more personal,” Jureidini told Loop Lifestyle.

Instead of choosing what you want in your quarantine kit, we both agreed on criteria and filled the kits with items mostly from our pantries. Putting thought and time into arranging the kits, plus the surprise element — not knowing what you're going to get from the other person — made the experience more fun,” Jureidini mentioned.

Jureidini, who makes a living from showcasing Jamaica’s hidden gems — hotels and tourist attractions, and covering local events like Reggae Month — has more time on her hands during the lockdown.

First, figure out the theme or concept you’ll use to pick the items.

It could be arts and crafts, self-care, comfort food, etc. If it’s food, make sure to check for allergies.

You should also wear a mask while preparing the kit, wear gloves, and wipe down everything before adding them to the container. Then agree to meet and practice social distancing while exchanging kits. Or if you are far away from loved ones, you can mail it or have it delivered to them.

It could mean your life, the life of people you love or someone else's loved one.

SAY A PRAYER FOR THE MEDICAL PERSONNEL ON THE FRONT LINES

SAY A PRAYER FOR THE DELIVERY PEOPLE TRYING TO GET YOU FOOD etc.

SAY A PRAYER FOR HUMANITY!