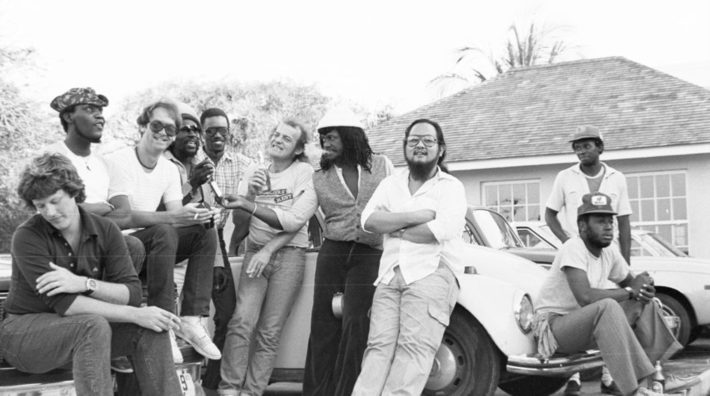 Talking Heads drummer Chris Frantz’s new book, Remain in Love, is a billet-doux to his bandmate and wife of more than 40 years, bassist Tina Weymouth, as well as documenting the couple’s musical journey together — first, as part of the most critically acclaimed New Wave band of the late 70s and early 80s, and later as co-founders of The Tom Tom Club, which topped the charts in 1981 with “Genius of Love.”

But there’s another ongoing love affair that Franz and Weymouth have been carrying on all these years, too, and that’s with the Caribbean — the Bahamas, in particular.

Talking Heads are sometimes described as a “world music” band, and Frantz’s introduction to Caribbean beats and rhythms began early: his parents had lived in Puerto Rico and traveled to the Virgin Islands and Trinidad, bringing home 78-rpm records of calypso and mambo songs that Frantz rediscovered as a young musician.

When Jimmy Cliff helped introduce reggae to the United States with the 1972 film, The Harder They Come, it caught the attention of Frantz and Weymouth, who had recently met and fallen in love as students at the Rhode Island School of Design (where they also would meet Talking Heads singer David Byrne)

“Tina had this Plymouth Valiant that we drove up to Boston to see the movie, and we loved it so much that we immediately went and bought the album, and then went the next weekend to see the movie again,” said Frantz.

As a drummer, Frantz — who counts The Mighty Sparrow, Toots and the Maytalls, and “Funky Nassau” performer Ray Munnings among his favorite Caribbean musicians  — incorporated the syncopated beats of Caribbean music into his playing for Talking Heads, particularly after the band traveled to Nassau in 1978 to record their second album, More Songs About Buildings and Food, which included the hit song, “Take Me to the River.” The Brian Eno produced album was the first to be cut at Compass Point Studios, established by Island Records founder Chris Blackwell.

Everyone from AC/DC to David Bowie and the Rolling Stones would end up making albums at the studio, which operated from 1977 to 2010, but, “I think we recorded more albums there than any other artists,” said Frantz. In addition to Talking Heads’ More Songs About Buildings and Food and 1980’s Remain in Light and 1983’s Speaking in Tongues, Frantz and Weymouth utilized the studio on the west end of New Providence Island to make the first three Tom Tom Club albums.

The Tom Tom Club was loosely inspired by Peanuts Taylor’s Drumbeat Club, a nightclub in downtown Nassau. The band included members of the Compass Point All Stars, the de facto house band at the Nassau studio.

Being in the orbit of Blackwell led to some interesting experiences —  “We used to live in the same building as Sean Connery, but Joe Cocker kept coming into the driveway and yelling, ‘Sean, give us a drink,’ so he moved,” Frantz recalled — but also some remarkable collaborations, including with pianist Tyrone Downie of the Wailers, percussionist “Sticky” Thompson, keyboardist Wally Badarou, and King Crimson singer Adrian Belew, among others.

Frantz and Weymouth loved the Bahamas so much that they became part-time residents of Nassau. “We bought an apartment (near Compass Point) that we still have, and the roof still leaks,” said Frantz. “That’s part of life down there. We still go down there, and hope to do so again in the not too distant future” — post COVID, that is.

For years, the couple and their family also took extended trips through the Out Islands on their 48-foot sloop, Katrinka, helmed by Tina’s father, a former U.S. Navy vice admiral.

“The Bahamas are 700 islanders in the sun, and we loved to sail from Nassau to Staniel Cay in the Exumas, and to snorkel in the Thunderbolt grotto,” said Frantz, who also recounted day trips from Nassau to deserted Allen Cay to visit the iguanas and to Big Major Cay, home of the Bahamas’ famous swimming pigs.

Other favorite stops include Lyford Cay, Cat Island, and out to the Exumas for the annual Family Island Regatta. “We had 22 years of bliss surrounded by a few hours of sheer terror,” laughed Frantz — a sentiment that will be familiar to anyone who sails.

Frantz and Weymouth’s Caribbean travels aren’t limited to the Bahamas: the couple traveled to Barbados in 1991 to produce an album with the British band Happy Mondays, explored the mountains of Jamaica during a stay at Blackwell’s Goldeneye hotel, and decamped to the legendary Oloffson Hotel in Port au Prince, Haiti on an art-buying trip.

Visitors to Nassau will find little trace of Compass Point Studios or the world-famous musicians who once inhabited its halls, but the vibrant Compass Point Beach Resort (originally founded by Blackwell and sometimes used by visiting stars) still welcomes guests to Love Beach and its popular beach bar. Frantz also is a fan of the National Art Gallery of the Bahamas, located in downtown Nassau.

“A lot of people go to Paradise Island and stay at a big hotel,” said Frantz. “We never go to those places. We prefer the Out Island experience, and the west end of New Providence is like that.”

“We love the easygoing, you-can’t-rush-life attitude of most people in the Caribbean,” Frantz added. “The people of the Bahamas are so happy to see you. It’s all about hospitality and equality’’